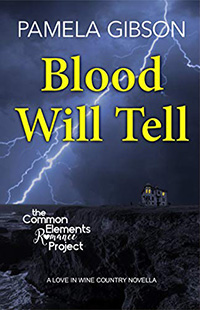 I hope you’ll sign up for my newsletter. You won’t see it in your inbox often… just when I have something to announce or give away.

If you’d like to get to know me better, sign up for my Blog. It comes to you on a Monday (or sometimes Tuesday) and I promise, it’s short and won’t show up often.

Police Chief Meg Beall has had a rough first year on the job and can’t afford to make another mistake. When a prominent citizen turns up dead, all clues point to his nephew. But if she arrests him, will the good citizens of Santa Marta think she’s out for revenge? He is, after all, the man who left her standing at the altar.

Popular winery manager Cabot Lane never hid his hatred for the uncle who made his life miserable, but he didn’t kill the weasel and it hurts that Meg thinks he did. He knows he doesn’t deserve her forgiveness, but if his uncle’s murder is to be solved, they need to work together and do it soon.

Because a killer’s still at large and the next victim may already be in danger.

Here’s What Reviewers are Saying…

“This is the first book i have read from this author and I will say that it is not to be missed!!! While this seems to be her first historical romance, I am glad to say it won’t be her last. I eagerly await the next book!!!” (Amazon Reader)

“Pamela Gibson has written a heartwarming tale about love, loss and compassion, and this enduring tale of lost love will tug at the reader’s heartstrings.” Read full review in the 2017 December issue of InD’tale Magazine.

Plumb Crazy About You

“The writing was fun and spicy and sweet all at once. I can’t believe how disappointed and yet happy I was when it ended. Disappointed because I wanted the story to go on longer, and happy because I absolutely loved the Happily Ever After!” (Marie’s Tempting Reads)

Shadow of the Fox

“Being a California native, I was very excited to read the ARC for this book. I know the state’s history fairly well, and this story was spot on. The California rancho time period is so rich, and Ms. Gibson paid it great honor. I loved her descriptions of the ranchos, the people, food, language, and clothing. She devoted meticulous care to them all.” (Cerebral_1)

A Kiss of Cabernet

“A Kiss of Cabernet is a deliciously written story in a beautifully captured setting. I liked the historical aspect to the book and the realism of the characters. I was entranced all the way to the end. A great read!” (Liz Wells)